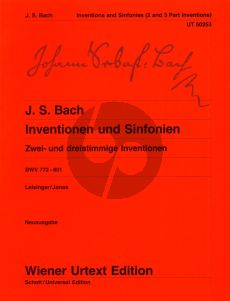 Johann Sebastian Bach’s Inventions and Sinfonias, better known as two- and three-part inventions, were an integral part of the teaching repertoire used in the composer’s piano lessons. And they still are! For piano pupils, there is no getting away from them, for their basic demands, that is ‘to learn to play in tune’ and ‘to achieve to play in a cantabile style’, are still valid.

The new edition of the Wiener Urtext Edition follows consistently Bach’s autograph fair copy. Ornamented versions from copies by Bach’s pupils providing an insight into Bach’s ornamentation have been printed separately; any mixing of the different versions has been deliberately avoided. A suggestion has been made, by means of an example, for the realization of the ornament signs of Sinfonia No. 5.

The notes on interpretation and the critical remarks provide information on further aspects of the performance practice. They are to be considered as suggestions and encouragement to study works the execution of which had not been laid down to the last detail, thus opening up a wide range of creative possibilities for teaching.