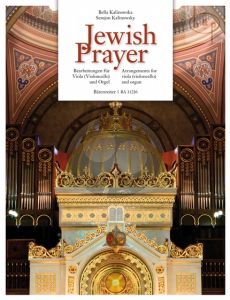 'Jewish Prayer' comprises works of the Jewish late Romantic tradition including one of the repertoire classics for strings 'Kol Nidrei' by Max Bruch. This edition also contains other popular performance pieces such as 'The Hebrew Melody' op. 23 by Albert Kellermann, 'Elohenu' by Friedrich Gernsheim, 'Sarabande' op. 8 by Joseph Sulzer and 'Prière' by Fernand Halphen. These works can be played by professionals as well as experienced amateurs. For possible performances of the complete works, the volume has been compiled as if it were as a concert cycle and completed with a work for solo organ, the 'Five Festival Preludes' by Louis Lewandowski. Separate parts for viola and violoncello are included with the score. High-quality works of the Jewish late Romantic tradition In addition to the solo part for viola there is also a part for cello For professionals and amateurs alike The concert pianist Bella Kalinowska was born in the Ukraine and received her musical training in Winnitsa, Odessa and Kiev. In addition to her extensive teaching and concert activities in the field of chamber music, she works as an editor for well-known music publishers. Semjon Kalinowsky was born in the Ukraine and studied viola at the State Conservatory of Music in Lemberg. He plays as a soloist and chamber musician and was awarded the title of Honoured Artist of Ukraine in 1998.