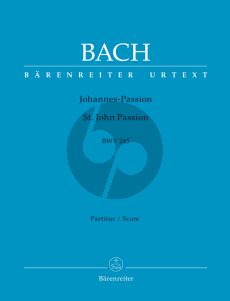 The St. John Passion was first performed in Leipzig on Good Friday of 1724. Written three years before the St. Matthew Passion, it was a work Bach revised during the rest of his life, in fact he did not leave us a definitive version either in print or fair copy. The sources give evidence of four different versions used at four performances - 1724, 1725, around 1730 and during the last years of Bach's life. They often contain two or more readings for the same passage, or even different movements that on different occasions occupied the same place in the work.

Our edition uses the final version IV as its basis with alternative movements and readings contained in the appendices. A comprehensive preface in the study score (German/English) TP197 gives full information.