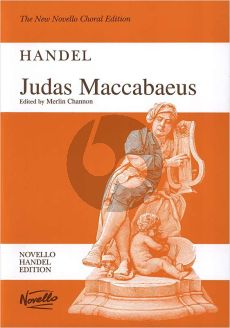 The Maccabaean Revolt in the second century B.C. provided the background to the story that unfolds in Judas Maccabaeus. It is part of the history of the Ptolemaic and Seleucid Empires. This oratorio follows the story from the death of Alexander the Great in 323 B.C. up until Judas' march on Jerusalem in 164 B.C. With a libretto supplied by Thomas Morell, Handel's great work was first performed at the Theatre Royal, Covent Garden, on April the 1st, 1747, as part of his annual Lenten season of oratorios. By the time of Handel's death in 1759, Judas Maccabaeus had become the composer's second most popular oratorio, having received 33 London performances under the composer's supervision (Messiah had 36). For SATB soli, SATB chorus and accompaniment. This version edited by Merlin Channon. Includes historical notes.