Junto a Rodrigo. An Anthology of Contemporary Music for Guitar - Album 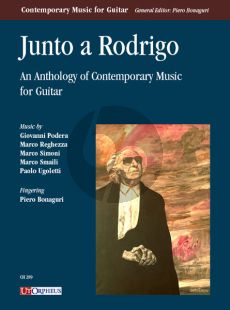 Giovanni Podera plunges us into a typically “Rodrigo-like” atmosphere with his evocative Fantasia, while the following three compositions are full of direct quotations from pieces also for guitar by the great composer from Valencia. Thus, Marco Simoni, in his expressive Junto a Rodrigo – which also provides the title to the volume – plays with themes taken from Junto al Generalife and from Dos piezas caballerescas for a cello ensemble as well as hinting at reminiscences of Tiento antiguo. As for Marco Smaili, in his impressionistic Fronda de la tarde, he evokes quite evidently Zarabanda lejana and Invocación y Danza, but there are more hidden references to Caminos de Santiago and even to the very famous Concierto de Aranjuez. Marco Reghezza builds his heart-breaking Nana estrellada on a sequence of chords used by Rodrigo in the fantasia ¡Que buen caminito!.

On the other hand, there are no direct quotations and echoes of Rodrigo’s way of writing in the Fuga a quattro voci by Paolo Ugoletti. However it was Rodrigo himself who constructed four-part imitative passages for guitar in Pasacalle and in the Ricercare of the Fantasia para un Gentilhombre. The close polyphony of the piece by Ugoletti may be considered as a tribute to this kind of craft shown by Rodrigo who, like Ugoletti, was able to write such dense and idiomatic counterpoint without being a guitar-player.

I am pleased that this volume comes out in the imminence of the 20th anniversary of the disappearance of the illustrious Spanish composer who gave so much to the musicians – and not only to them. (Piero Bonaguri)