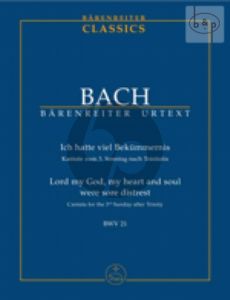 The cantata Ich hatte viel Bekümmernis dates from around 1713 and was probably performed for the first time that year in the Liebfrauenkirche in Halle. Its assigning to the third Sunday after Trinity probably only occurred the following year. With its large-scale structure and strong emphasis on biblical texts, it was extremely popular in the 19th century and remains one of Bach's best-known cantatas today.