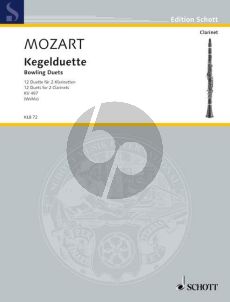 Mozart's Kegelduette owe their name to a handed-down anecdote according to which the duets were composed during a bowling game. Originally written for two basset horns, the work became later known in the clarinet version. Our new edition has been designed for beginner and intermediate clarinettists. Difficult pitches have been provided with suggestions for transposition by the editor, thus making both parts easy to play even for inexperienced players. The duets are ideal as additional chamber music pieces for beginners and can be played by teacher and pupil or by two pupils at the same level. A valuable addition to teaching and performance repertoire. 16 pages. Easy level.