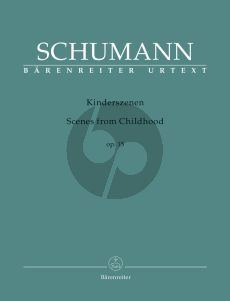 In spring 1838 Schumann composed "30 short, sweet things", as he called them in a letter to his fiancée Clara Wieck. He originally composed these under the title "Kindergeschichten" and intended them as a supplement to the "Noveletten" op. 21, also composed in 1838. From these piano miniatures he chose twelve pieces. At the beginning of the following year, now expanded with a thirteenth piece, they were published as "Scenes from Childhood" by Breitkopf & Härtel in Leipzig. The collection centred on Träumerei which is the seventh and the most famous piece in the collection.
The significance of the cycle was completely misjudged by the critic Ludwig Rellstab but it was enthusiastically received by Liszt. He wrote to Schumann in June 1839 that he was frequently playing "Scenes from Childhood" to his then three-and-a-half year old daughter Blandine with enthusiasm, but particularly to himsel

The leading German pianist Ragna Schirmer has earned an outstanding reputation, not only by winning the Leipzig Bach Competition twice but also for receiving numerous awards including two ECHO-Klassik prizes. She has long had a special interest in historical performance practice on modern instruments, reflected most recently in her highly-praised complete recording of the keyboard suites by George Frideric Handel. As well as an international performing career, Ragna Schirmer is currently a professor at the Mannheim University of Music and the specialist school Latina August Hermann Francke in Halle.

Robert and Clara Schumann's compositions feature at the centre of Ragna Schirmer's work and she has recorded Robert Schumann's "Variations on a theme by Beethoven" and "Symphonic Studies" on CD. Her concerts which she plays on Clara Schumann's original Grotrian grand piano of 1879 have given her important insights into practical performing issues.