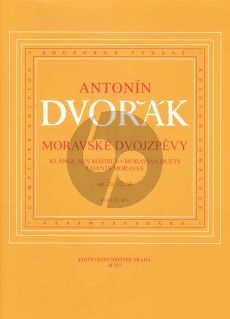 The Moravian Duets, written to Moravian folk songs with piano accompaniment, were instigated by Jan Neff, an influential wholesale merchant in Prague who employed Dvorak as a piano teacher for his family. The composer first wrote Three Duets for Soprano and Tenor with piano accompaniment, Op. 20. The Neff family were delighted with them and so Dvorak continued with cycles II and III, Op. 32, this time for female voices. The entire collection culminated in 1877 with another four duets with piano accompaniment,published as Op. 38. Instead of a simple arrangement of folk melodies, Dvorak created duets based on folk texts with their own musical setting. This opus contributed significantly to the success and familiarity of the composer's work abroad. This title is the critical edition based on the composer's manuscript.