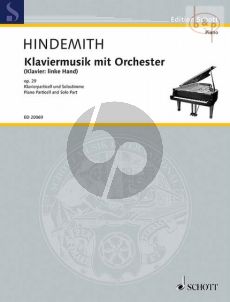 This concerto for the left hand by Paul Hindemith was not premiered until more than eighty years after its creation - it took that long for the musical world and researchers to get access to it. Hindemith composed the piano piece in 1923. The pianist Paul Wittgenstein who had lost his right arm in the First World War offered him (as well as Korngold, Strauss, Franz Schmidt, Britten, Prokofiev and Ravel) this well paid commission. But he did not like the piece very much, probably because he thought it was too modern. As a consequence, it disappeared. It did not reappear until the 21st century and was finally premiered in 2004. In addition to the study score (ED 9608) Schott Music now also presents Hindemith's masterpiece in a version for two pianos. Advanced.