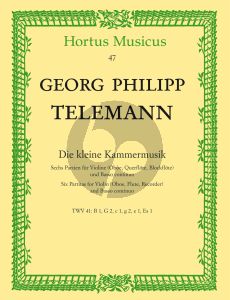 This edition of the Six Partitas for Violin (Flute, Oboe,Recorder) and Basso continuo by Georg Philipp Telemann, published under the title La Petite Musique de Chambre is based on a print issued by the composer himself in Hamburg in 1728. This print bears the following title (quoted from the copy Mus. 1032 in the Hessische Landes- und Hochschulbibliothek Darmstadt / RISM T 409): La / PETITE MUSIQUE / de / CHAMBRE; / Die kleine / Cammer=Music; / von / Telemann. / Hautbois, ou Violon, ou Flute traverse, / ou Clavessin, / avec la / Basse chiffrée. Telemann considerably restricted the range of the solo part of these partitas (b'' is the highest note, d' the lowest) so that they could be played on the most widely used melody instruments of his time, above all on the baroque oboe and the baroque transverse flute. His aim was to supply a great number of performers and music buyers with pieces that were as versatile as possible. This can be seen clearly in the preface of the Frankfurt first edition of 1716, where Telemann speaks of 'Six Partitas that are conceived and written in a light and singing style for the violin, the transverse flute and the keyboard, but above all for the oboe, so that they can be used not only by beginners as practice pieces but also by virtuosos, who can play them to their best advantage.' The first edition was dedicated to eminent virtuosos and friends of Telemann. The text of the dedication contains some informative comments by the composer concerning the work, which read as follows: 'Gentlemen! I am all the more confident that you will look kindly upon my dedication of this Little Chamber Music to you herewith as I EPILOGUE have had the honor of appreciating certain tokens of your kindness and courteousness, which can never be praised highly enough. However, it remains to be seen whether the composition itself will win your esteem. It is a matter of vital importance to be able to gratify you gentlemen, whose excellence is admired by half the globe. I am not entirely without hope, since, when creating the work, I chose as my guide the taste which you yourselves are wont to cultivate on the oboe and which has so often touched me in a manner which words cannot express. To this end I have limited the range as much as possible, avoided leaps across large distances, as well as difficult and uncomfortable tones. On the other hand, I have attempted to provide a great number of the brilliant tones which nature has distributed at various places on this delicate instrument. I have also tried to be concise in the arias, partly in order not to overtax the player, and partly so as not to tire the listener's ears through prolixity. With regard to harmony, I must confess that it contains little or no chromaticism, but only natural and ordinary progressions; I did this, however, in view of pleasing those, hence the majority, whose knowledge of music is less than profound. Finally, I have attempted to give everyone something to suit their taste.' The editor's task consisted of the careful adaptation of the music as it appears in the 1728 print to modern notational norms. The editor also elaborated the thoroughbass accompaniment and added ornaments and thoroughbass figures. The editorial additions are indicated by brackets. Hugo Ruf