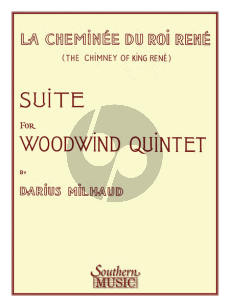 It is interesting to note that this music was orignally written for the film 'Cavalcade d'Amour' which dealt with the subject of love in three different time periods: the Middle Ages, the 19th Century, and the 20th century. Milhaud wrote this music for the first segment of the film and the balance was composed by Honegger and Desmormiere. There is an expression which has been adopted from the French Language - "Se Chauffer a la cheminee du roi Rene" which translates literally "to warm one's self at King Rene's chimney" and really means "to bask in the sun."