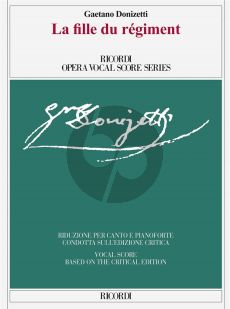 La fille du régiment, always one of Donizetti’s most popular stage works, was first performed at the Théâtre de l’Opéra-Comique in Paris on 11 February 1840. It was composed by Donizetti, to a libretto by Saint-Georges and Bayard, in 1839. Later on, Donizetti prepared an Italian version as well, using a libretto adaptation by Calisto Bassi. The opera enjoyed tremendous success – at the Opéra-Comique alone, more than one thousand performances were given between 1840 and 1917 –, and is widely staged in the major European and American opera houses.