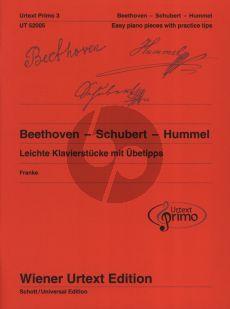 With the new Urtext Primo series, the Wiener Urtext Edition wants to close the gap arising at the point of transition to additional lessons after having studied a piano method. Beginning with a performance level which is outlined by pieces such as Bach's Minuet in G (BWV Anh. 116), Mozart's Minuet in F (KV 5) or Schumann's Wilder Reiter (Op. 68/8), each volume contains works by three different composers, with the aim of offering piano pupils (or even adults who want to resume piano playing) a wide range of repertoire pieces on the basis of which they can enhance their technical and musical skills. In contrast to conventional piano anthologies, the pieces' range of levels of difficulty is relatively narrow so that the volume can be used continuously over a period of about two years. The selected repertoire takes into account not only pieces of the classic canon of lessons, but also lesser known works which are in no way of less importance for piano lessons. The explanations included at the end of each volume shall help to deepen the knowledge of musical styles, music history and piano playing. A repertoire chart at the end of each volume gives a rough overview of the levels of difficulty of the selected pieces. After Vol. 1 with works by Bach, Handel and Scarlatti and Vol. 2 with compositions by Haydn, Mozart and Cimarosa, Vol. 3 contains pieces by Beethoven, Schubert und Hummel, including popular pieces such as Beethoven's 'Für Elise' and lesser known, yet stimulating settings by Johann Nepomuk Hummel. 64 pages.