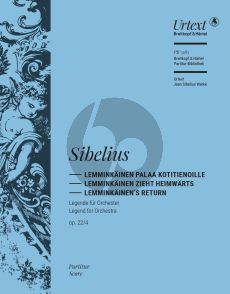 Little is known about the actual composition process of Lemminkäinen and the performance and publication history is rather complex, resulting in a first complete printing of all the four movements en suite through the complete edition of Jean Sibelius Works only in 2013.

In summer 1894 Sibelius went to Central Europe, carrying among others a plan for an opera freely based on the Kalevala in his mind. But during this trip he reassessed his composing: “I think I have found my old self again, musically speaking. I think I really am a tone painter and a poet.” As a result he abandoned his opera plans, but musical material may have found its way into the Lemminkäinen pieces which he started composing during that time. Lemminkäinen became popular from the beginning and has attained a fixed position in the concert repertoire.