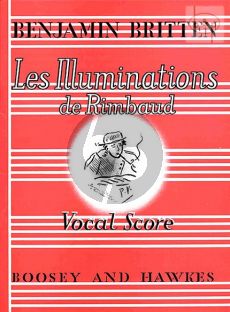 Les Illuminations (1939), is a song cycle written for high voice (soprano or tenor) and string orchestra. While on a weekend excursion, Britten read poems by the nineteenth century Frenchman Arthur Rimbaud, and stated, 'I must put them to music.' Whereas many composers - even the notoriously nationalistic French - had passed over Rimbaud's works, considering them too thorny for lyrical settings, Britten was deeply affected by them and felt a strong affinity with the author; especially familiar to Britten was Rimbaud's sense of cynicism, and a longing for the innocence of childhood. Les Illuminations was completed on October 25, 1939, and was dedicated to the Swiss soprano, Sophie Wyss, who gave the premiere in London, 1940 (she had previously given the first performance of Britten's Our Hunting Fathers in 1936). Les Illuminations dates from Britten's 'American' period (1939-1942), a remarkably productive time during which he also completed his First String Quartet (1941), his Sinfonia da Requiem (1940), and the Michelangelo Sonnets (1940). In writing Les Illuminations, he not only embraced the French language, but also distinctly French elements of style; this marks the beginnings of his move away from certain identifiable 'Britishisms,' and toward a more cosmopolitan and personal style (The Michelangelo Sonnets embraced Italian characteristics with similarly open arms). The piece opens with a Fanfare in which Britten imitates the sound of two trumpets with a violin and a viola. The second movement is titled 'Villes,' and is about the industrialization of cities; the constant eighth note pattern conveys the mechanical sounds of the city. The third movement of the song cycle is divided into two parts, 'Phrase,' a simple song, and 'Antique,' a dance-like piece. The next movement, 'Royaute,' is ceremonious in its portrayal of a couple wishing for and attaining royalty - at least in their own minds! 'Marine,' the sixth song, sets the vocal line against an ostinato accompaniment; this leads into an orchestral interlude. The seventh movement, 'Being Beauteous,' has an erotically charged text, while the text of 'Parade' describes the participants in the titular spectacle. The last movement is befittingly titled 'Depart.' Description by Rovi Staff.