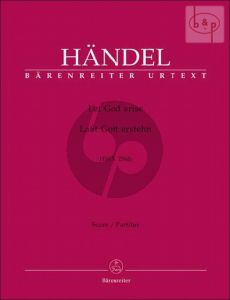 Handel's four anthems were all composed during his London period in the Chapel Royal . 'As pants the hart', his fifth setting of this Psalm text, was written in March 1738 for performance at a benefit concert for the King's Theatre in the Haymarket. Until just before Handel's first visit to England , the only instrument permitted to accompany the service in the Chapel Royal was the organ. These four works (O sing unto the Lord HWV 249a, I will magnify thee HWV 250b, As pants the hart HWV 251e, Let God arise HWV 256b), with their orchestral accompaniments, thus represent something akin to a new genre in English church music. The four anthems are presented in clearly laid out vocal scores with easy-to-play piano reductions based on the Urtext from the 'Halle Handel Edition'. Their winningly varied and self-sufficient orchestral writing provides a suitable framework for the festive chorus and the equally festive solo numbers. Today they sound as splendid as ever before. The full scores and vocal scores also contain a German translation along with the original English.