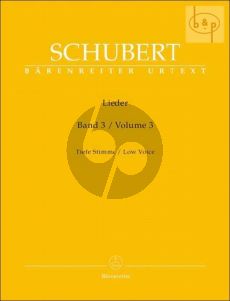 Walther Dürr, one of the most distinguished Schubert scholars, has edited the third volume of Schubert lieder in versions for high, medium and low voice. With this publication, further lieder are now available in Schubert's original groupings with definitive texts based on the "New Schubert Edition". The third volume contains not only well-known lieder such as Der Wanderer an den Mond and An die Musik but also Schubert's best-known song cycle Die Winterreise. The appendix contains five lieder from this cycle (Wasserflut, Rast, Einsamkeit, Mut and Der Leiermann) in the keys in which Schubert originally wrote them. For the first edition these were transposed into lower keys by him or his publisher Haslinger. Therefore, the volume for high voice (BA 9103) contains a further attraction for tenors whereas the tessituras in the main part of the volume are more suitable for a high baritone. In the editions for medium voice (BA 9123) and low voice (BA 9143), the appendix contains alternative higher versions for these songs. The practical side of music-making has also been taken into account in this edition. The larger format of the volumes guarantees a clear easy-to-read layout. The extensive foreword by Walther Dürr (Ger, Eng) describes the genesis and transmission of each lied as well as its sources.