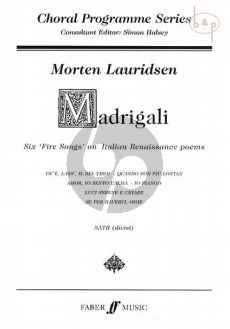 Morten Lauridsen is most noted for his vocal cycles and sacred motets, which are performed extensively throughout the world. He is Professor of Composition at the USC Thornton School of Music in the United States. The Madrigali: Six 'Fire Songs' on Italian Renaissance poems were premiered in Los Angeles in 1988. Each of the six poems in the cycle contains romantic references to fire and the music is unified by manipulations of a sonority called the 'Fire-Chord', which opens the piece and is found extensively throughout. Stylistic features of Italian Renaissance madrigals - including word painting, modality, bold harmonic shifts, intricate counterpoint and augenmusik - are blended within a contemporary compositional idiom. The Madrigali are designed in an overall arch form, with the 'Fire-Chord' returning in its original configuration in the last movement - the final cadence is left unresolved, as the love of which the poet speaks will forever remain unrequited.