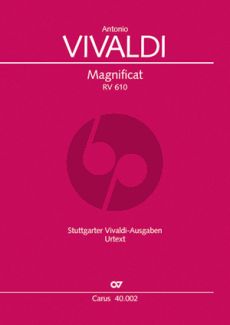 The office as a priest and the long years as musical director of the Ospedale della Pietà (a large orphonage in Venice) both occasioned and inspired him to compose church music in large variety. The Magnificat RV 160 has come down to us in two versions. The first version is dominated by the choral concept, in the second version the texts of Et exultavit, Quia respexit, Quia fecit, Esurientes, and Sicut locutus est are each given new and extended solo arias that – as the manuscripts reveals – were tailored to voices of girls from the Ospedale who are mentioned by name in the autograph.