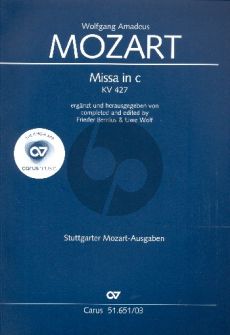 The C Minor Mass K. 427 by Wolfgang Amadeus Mozart is a fascinating work. But to speak of "the" Mass is inaccurate, for basically it is no more than a musical torso, full of enigmas and problems, yet full of magnificent music. It is hardly surprising that attempts have been made to create a performable version of Mozart’s fragment since the 19th century.

Depending on the date of reconstruction and background of the arranger, these attempts sound quite different, and often the individual style of the respective arranger can be clearly discerned.Now Frieder Bernius and Uwe Wolf have published a new edition of the Mozart mass which attempts to produce a performing version whilst maintaining the greatest respect for the available material, and without obscuring Mozart’s musical manuscript with their own contributions.