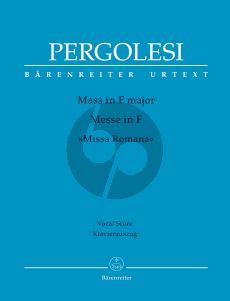 The “Missa in F” of 1734 for two or four choirs is probably Pergolesi’s most important work for choir and orchestra. The nickname “Missa Romana” was added later in reference to a performance given in Rome during Pergolesi’s lifetime. This Urtext edition presents the work for the first time in the four-choir version that Pergolesi wrote for the above mentioned performance in Rome. Choirs III and IV are reproduced in smaller type and are added to the version for double choir in order to intensify the overall sound. This allows the work to be performed not only with two choirs but also in the delightful enlarged version for four choirs. Rounding off the edition are an informative Foreword (Eng/Ger) and a Critical Commentary (Eng). Mixed choir (SSATB) (2), Mixed choir (SATB) (2), Orchestra • First publication with choirs III and IV • Can be performed with both two or four choirs