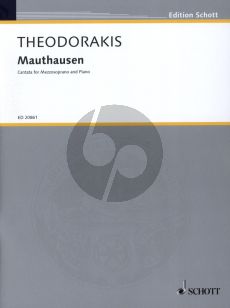 Sung texts are in Greek; English, German and French translations are included. A good friend of mine, the poet lacovos Kambanellis, was a prisoner in Mauthausen during World War 11. At the beginning of the sixties, he wrote his memories of this time und er the title of Mauthausen. In 1965, he also wrote four poems on the subject and gave me the opportunity to set them to music. I did this with much pleasure, firstly because I liked the poetry of the texts, and secondly because I was myself locked up during the Nazi occupation in Italian and German prisons, but mainly because this composition gives us the chance to remind the younger generation of history, that history that must never be forgotten. First and foremost, of course, the Mauthausen Cantata is addressed to all those who suffered under Fascism and fought against it. We must keep the Nazi crimes continually in our minds, because that is the only guarantee and the only way to assure that they are not repeated. And we can see every day that the ghost of Fascist is far from being laid. It seldom shows its real face, but Fascist cultures and mentalities exist all over the world. For us, who had to live through this time of horror, the most important task is to protect our children against this peril. (Mikis Theodorakis, 1999)