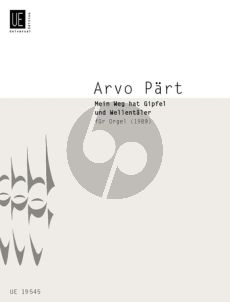 Mein Weg was written for organ in 1989. The title was inspired by a short poem from Livre des Questions, the magnum opus of the poet Edmond Jabès, who was born in Cairo and emigrated to France in 1957. It reads: My path has long hours, / jolts and pains. / My path has peaks and sea-troughs, / sand and sky. / Mine or thine. The image of life's portentous sea-troughs seems to have found an echo in the work's compositional fabric with its constant, dynamically differentiated upward and downward motion. We can hear it, for example, in the three distinctly structured forms of motion using the same tonal material, each assigned to a different set of instruments. Wolfgang Sandner