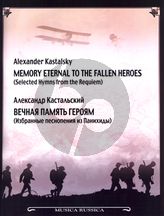 When World War I broke out, Alexander Kastalsky immediately conceived of an eclectic, "ecumenical" Requiem, which would use melodies from the various nations and faiths allied with Russia (Roman Catholic France, Anglican England, and others). By 1916 he had completed at least two different choral-orchestral versions, as well as a version for chorus and organ.

The composer then reworked the Requiem into an a cappella version in Church Slavonic, which followed the order of the Russian Orthodox panihida. This is the version, originally published in 1917, presented in this new edition.

This 45-minute work represents a major addition to the lineup of Russian choral masterworks as well as to the repertoire of Requiem settings by major Romantic-era composers.

Kastalsky was acclaimed as the founder of the “new Russian choral school,” centered around the Moscow Synodal School of Church Singing and its Synodal Choir. His compositional innovations--extensive use of chant, rich choral orchestration and variety of texture, unconventional voice leading reminiscent of folk song--inspired such composers as Gretchaninoff, Chesnokov, Nikolsky and Rachmaninoff, amidst a host of others.