Second Version / Based on the Urtext of the New Schubert Edition 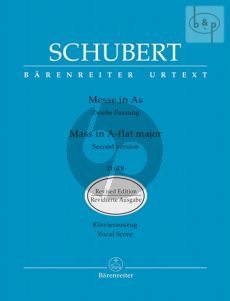 Based on the Urtext of the New Schubert Edition

The piano part has been thoroughly re-worked for this new vocal score of Schubert's Mass in A-flat major (D 678). Andreas Köhs' piano reduction reliably reflects Schubert's orchestral score and is at the same time idiomatic piano writing. Bärenreiter's new revised vocal score is compatible with the old vocal score as well as with the orchestral parts and the full score already available.

Unlike the four early Masses, Schubert did not write his fifth as the result of a request for a particular performance – he evidently intended it as a proof of the mastery to which he had attained in the meantime.

The present edition presents the revised, second version of the Mass. Also included as an appendix is the discarded Fugue from the first version (extant in a copy made by Schubert’s brother Ferdinand for the intended performance in 1823). This movement – unlike the later, a “more modern” Fugue – corresponds to Schubert’s original concept of the Mass, which in general he merely modified when revising the work, rather than fundamentally altering it.

Based on the Urtext of the New Schubert Edition