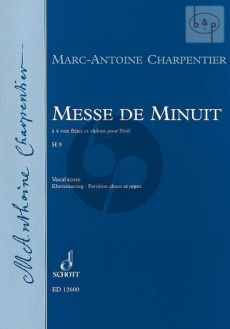 Of the 11 surviving settings of the Mass by Charpentier, the present work, the Messe de minuit, is without doubt one of the most popular. Although Charpentier's Parisian career is quite well documented, little is known about the genesis and first performance of the Messe de minuit. It is likely, however, that it was commissioned by the Jesuits of the church of Saint-Louis (today, Saint-Paul-Saint-Louis) for whom Charpentier had been working as maître de musique since 1687. The Messe de minuit belongs to the tradition of the parody-mass for which Charpentier adapted 10 noëls - whose titles are given in the autograph MS - to the text of the ordinary and the resulting music is fresh, charming and jubilant. 65 pages.