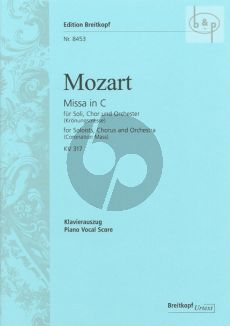 Piano Vocal Score by Otto Traubmann revised by Franz Beyer. This edition is based on Mozart's own autograph copy which was evacuated from the Preussische Staatsbibliothek (Prussian State Library, Berlin) to the Biblioteka Jagiellonska (Jagiellonian Library, Cracow, Poland) during World War II; it became available once again for musicological research in the 1980s.