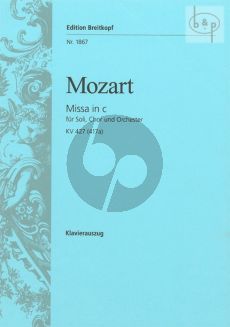 Wolfgang Amadeus Mozart worked on the Mass K. 427 (417a) during the years 1782/83. The completed movements of the Mass were performed in the church of St. Peter's convent in Salzburg on 26 October 1783 - the complete work, however, remained unfinished. Thanks to Alois Schmitt's supplements, the work became performable in its entirety for the first time in 1901. Basing himself on Mozart's sketches, Schmitt completed the instrumentation, which at times had not been definitely notated, constructed the Agnus Dei from the Kyrie of the Mass and compiled the missing parts of the Credo by borrowing from other works by Mozart.