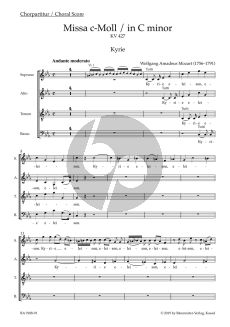 Mozart’s magnificent unfinished “Great Mass in C minor K. 427” is impressive not only for its monumentality and musical beauty but for its fragmentary state which has fascinated scholars and performers for decades.

Working together with the International Mozarteum Foundation in Salzburg, Barenreiter now presents a new edition of this work, reflecting the cutting edge of scholarship while doing justice to the needs of performers.

High scholarly standards, the completion and reconstruction of movements: this pioneering publication incorporates all this in order to come as close as possible to the work itself:
- The “Kyrie” and “Gloria”, both of which survive complete in Mozart’s hand, are edited in accordance with scholarly standards.
- The first two sections of the “Credo” have been meticulously completed by the editor Ulrich Leisinger, drawing on original Mozart compositions e.g. the aria “Deh vieni non tardar” from “The Marriage of Figaro” and paying attention to a stylistically appropriate and transparent sound.
- The “Sanctus” and “Benedictus” (with the “Hosanna”), which are either incomplete or survive only in secondary sources, have been reconstructed by the editor.

Sections without any known sources are left out in this edition. Rounding off the publication are an extensive Foreword (Ger/Eng) and a detailed Critical Commentary (Eng).

The first performance of Ulrich Leisinger’s new edition was given in April 2019 in the Elbphilharmonie Hamburg by the Hamburg State Philharmonic Orchestra and the ChorWerk Ruhr under the baton of Kent Nagano. The first Austrian premiere took place in Salzburg on August 2019 in the Great Hall of the Mozarteum, with Andrew Manze conducting the Salzburg Camerata to rousing applause from audience and critics alike.