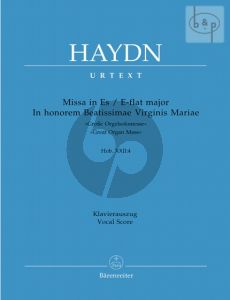 Following his 'Jugendmesse' from 1749, church music played only a secondary role in Haydn's creative output. It was not until 1766 with the 'Cäcilienmesse' and again in 1768-69 with the 'Great Organ Mass', that Haydn returned to this genre of composition. This Mass in E-flat major belongs to the same period as the 'Sturm-und- Drang' symphonies. Some of the remarkable features of this period are reflected here in the expansion of expression combined with a new very original musical language. The score also contains the traditional Viennese trumpet and timpani parts although it is extremely unlikely that they stem from Haydn. As Haydn at least tolerated these parts, the performance material contains both the original as well as the expanded versions. Hadyn's 'Sturm-und-Drang'Mass' Urtext from the Complete Haydn Edition Performable in both versions Clear and easy-to-play vocal score.