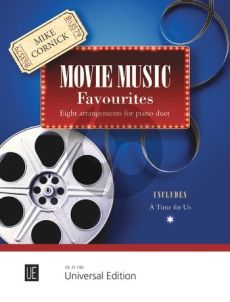 Mike Cornick adds to his previous arrangements for piano duet this mouth-watering selection of music from the movies. “Movie Music Favourites” includes, in intermediate arrangements, many gems of classical music, all closely associated with famous films. For example, who can hear Strauss’s “Blue Danube” waltz without thinking of Kubrick’s film “2001: A Space Odyssey”. Or the beautiful slow movement of Mozart’s Piano Concerto No.21 without “Elvira Madigan” coming to mind. Nowadays, Mozart’s work is often called the “Elvira Madigan Concerto”! Music written especially for films is not ignored either; the selection includes “A Time for Us”, composed by Rota and others for Zeffirelli’s film “Romeo and Juliet”. Cornick’s arrangements will not stretch intermediate players, who can play as a traditional duet or individually use the accompanying CD which will provide play-along tracks for either the Primo or Secondo parts, as well as complete performances for guidance. Similar previous arrangements by Cornick include “Charleston for Two”, “Tea for Two” and “Pink Panther for Two”