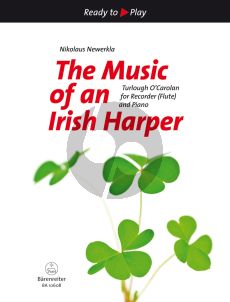 Turlough O'Carolan (1670-1738) is considered the prototype of the travelling Irish harpist, supplying his continually changing audience with new tunes and poignant stories. His melodies which are steeped in Irish tradition have made him immortal. They have also had a lasting influence on the development of Irish music. Many of his tunes have provided a basis for thousands of later melodies.

This edition for descant or treble recorder and piano presents, among others, the following pieces: “James Betagh Jig”, “Carolan’s Cup”, “Carolan’s Farewell to Music”, “Kitty Magennis”, “Hewlett”, “Mr. O’Connor”, “Fanny Power”. The arrangements include an optional part for a second flute.