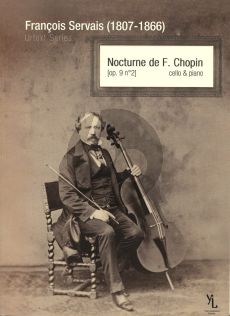 Frédéric Chopin (1810–49), a Polish pianist and composer, was a master of small form. His Nocturnes stand among the finest works for the piano.

While composing in simple forms, Chopin was able to craft florid melodies. Many violin and cello virtuosos of the Romantic era recognized Chopin’s melodic genius and made numerous transcriptions of these works.

François Servais was one of the first cellists to transcribe the E-flat-major Nocturne, a work that is almost synonymous with the name “Chopin.” Servais transcribed this Nocturne for cello and piano in D major, a key better suited for the cello. This transcription closely follows Chopin’s original text, more so than later transcriptions by Pablo Sarasate and David Popper. In three places, Servais gives the cellist an “easy” and a “difficult” option. It is the “difficult”

reading that is closest to Chopin’s original. From 1863 to 1938, Schott printed over 7,000 copies of the Servais’s transcription for cello and piano. In the 1910s, this transcription was recorded by Anton Hekking, Joseph Hollman, George Rogovoy, and Thomas Weist-Hill.