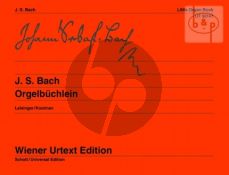 The ”Little Organ Book”, perhaps the most celebrated collection ever of chorale preludes, owes its title to J.S. Bach’s application for the post of Cantor at St Thomas’ Church in Leipzig. Lacking an academic degree, Bach wanted to demonstrate his qualifications as a teacher through his compositions – including his Inventions, Sinfonias and the ”Well-tempered Clavier”.

This also led him to append a misleading title to the most ambitious project of his time at Weimar: he called this collection of chorale preludes – originally meant to number 164 pieces – pieces for an ”aspiring organist”. In fact the 44 completed compositions of the ”Little Organ Book” are demanding masterpieces giving an impressive display of the full range of the so-called short chorale prelude.

This new critical edition returns for the first time to the format of the principal sources dating from Bach’s time, in that most of the pieces are reproduced on two systems, rather than three. Grade: Intermediate