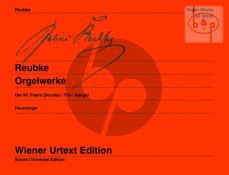 When Julius Reubke, a pupil of Liszt, died in 1858 at the age of only 24, his oeuvre included two monumental works (a piano and an organ sonata) apart from a few smaller compositions. The Wiener Urtext Edition has all extant organ works collected in one volume: the Organ Sonata, also entitled '94th Psalm', the Trio, and an adagio which was only recently discovered. In the album of Marie von Sayn-Wittgenstein and is a variant of the adagio from the Organ Sonata. Here it is presented independently, arranged on two staves and thus playable on the piano as well. The Sonata, influenced by the virtuosity and the personal style of Franz Liszt, is considered to be one of the greatest organ works of the Romantic period. The Trio, a musically charming but technically less demanding piece, is a valuable addition to the organ teaching repertoire. Autographs of the Sonata and the Trio do not exist. The only extant documents of these works are first editions which, in the case of the Sonata, were not published until after Reubke's death. The new edition tries to correct obvious mistakes contained in the not exemplary first edition, or to offer gentle suggestions for improvement in cases of doubt. The Adagio, however, is written by Reubke's own hand. Known as the only extant autograph of the composer, it is printed both in modern notation and as facsimile in the present edition.