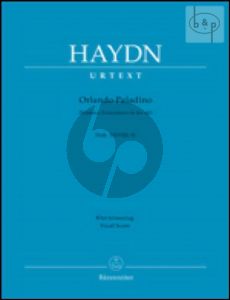 Haydn's opera Orlando paladino was performed on 6 December 1782 on the occasion of the name-day of Prince Nikolaus von Eszterházy in the opera house at Schloß Eszterháza. It was an immediate success, followed by twenty further performances in Eszterháza before a triumphal tour of European theatres with performances in more than twenty cities.Since the time of the Minnesingers, the subject of the warrior Roland, a (historically inaccurate) nephew of Charlemagne, had been a popular literary model; numerous variants on this subject were also frequently set to music, including settings by Lully and Handel. In his interpretation, Haydn concentrated principally on the cheerful and buffo-like elements of the libretto, and showed his skilful humour anew in every bar of the work.The vocal score is based on Vol. XXV/11 of the Haydn Edition.Instrumentation: 3 Soprano solo, 4 Tenor solo, 2 Bass solo, Orchestra