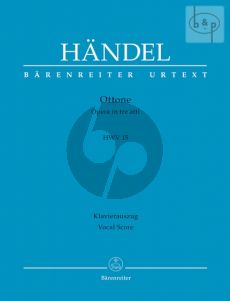 Handel completed his opera "Ottone" in August 1722, but the first performance did not take place until January 1723 in the Haymarket Theatre, London; the composer had waited so long for the famous soprano Francesca Cuzzoni who he had in mind for the role of Teofane. Ottone was an immediate success from the beginning, not only for its top-class cast but also because of its formal and musical structure. It received numerous revivals until 1733.

Stylistically, Ottone follows in the Neapolitan opera tradition with emotionally charged arias as the principal vehicles of expression, whilst the plot is carried forward in the secco recitatives. The dramatic action is interpreted and intensified through the choice of arias and keys.

The vocal score is based on volume II/12 of the Halle Handel Edition, which contains the complete critical musical text of the opera for the first time.