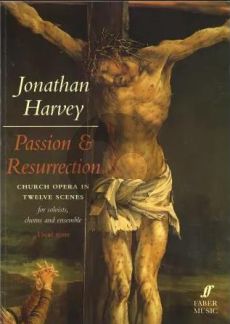 Unfolding over 90 minutes, Passion and Resurrection is one of Jonathan Harvey’s most important statements. It was commissioned and premiered by Martin Neary and Winchester Cathedral in 1981, and set’s Michael Wadsworth's translation of a 12th-century Latin passion play.

Opening with music of gripping, austere simplicity, the work gradually gains momentum over 12 scenes. In the first half, men’s voices and low brass predominate in in music of harshness and angularity whilst the radiant second part, focussing on the Resurrection, introduces on women’s voices. The work has clear affinities with the Britten’s Church Parables, not least in the plainsong-rooted call and response passage with which it begins. It also includes plainsong hymns that may be sung by the audience while organ and orchestra surround the unison chant in a vast pulsating halo of chord-clusters.