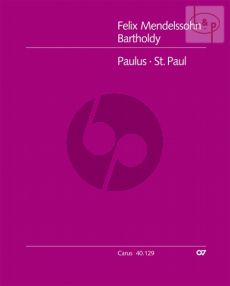 Mendelssohn composed his first oratorio Paulus under the impression of his own revival of J. S. Bach's St. Matthew Passion in 1829. He integrated chorale settings into St. Paul, for which he was accused by his contemporaries of making a stylistic break, using an element unsuitable to church music. In spite of these reservations, during Mendelssohn's lifetime St. Paul was one of his most popular works, which received numerous performances throughout Europe. Robert Schuman praised the 'inextinguishable color of the instrumentation' and the 'brilliant play with all the forms of composition.' He described it as a 'jewel of the present.' Scoring: Soli SATB, Coro SATB, 2 Fl, 2 Ob, 2 Clt, 2 Fg, 4 Cor, 2 Tr, 3 Trb, Serpente, Timp, 2 Vl, Va, Vc, Cb, Org. Duration: 145 min.