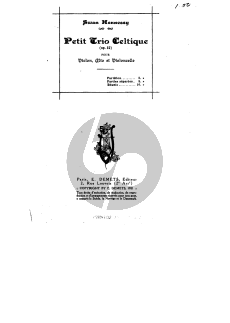 Edward Swan Hennessy (1866-1929) was born in Rockford, Illinois and grew up in Chicago. It is not known where his early music education took place, though presumably it was in Chicago. Some sources suggest he studied at Oxford before attending the Stuttgart Conservatory. He lived in London for several years and finally settled in Paris in 1903. While his earlier works were firmly in the Romantic style a la Schumann, his later works were all influenced by the French Impressionists.

The Petit Trio Celtique dates from 1921. As the title suggests the work is relatively short, consisting of four movements. The first, Allegro, bears the subtitle in Irish style and indeed sounds like an Irish dance. The second movement, Moderato, is subtitled in the style of Brittany while the last two movements, Andante and Allegro are in Irish style. The trio presents no technical difficulties and can be programed for concert.