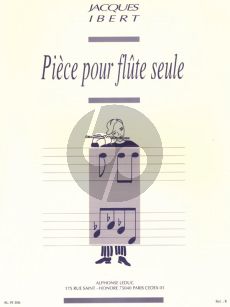 Composed in 1936 by Jacques Ibert (1890-1962), a neoclassical composer who won the Prix de Rome in 1919, Piece for Solo Flute was premiered by Marcel Moyse. This publication was written in three movements in two contrasting themes. The first theme is a slow lyrical melody compared to the second one which is much faster. The third movement of Piece for Solo Flute brings back the first theme again but with more ornamentation this time. Jacques Ibert (1890-1962) also composed many symphonic suites, operas and seven orchestras, including 'Angelique' (1926) and 'Divertissement' (1930). He also was in charge of the Académie de France in the Villa Médicis (Roma) and was later administrator for the Paris Opera.