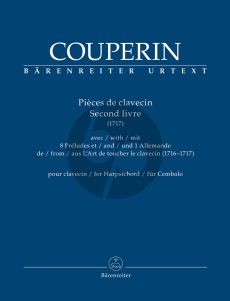 ‘Once again the French musicologist Denis Herlin, who mastered the harpsichord under the tutelage of such keyboard legends as Kenneth Gilbert and Huguette Dreyfus, has presented an exemplary edition of a classic from the harpsichord repertoire.’ (Jury of the German Music Edition Prize on BA 10844). Bärenreiter presents Book II of Couperin’s “Pièces de clavecin”, first published in 1717, In addition the eight preludes and one allemande from his treatise “L’Art de toucher le clavecin” are included in the appendix. For the first time Denis Herlin has evaluated the many later impressions of the original print, most of which he unearthed himself in international libraries. By preserving the essential features of the original print while largely dispensing with disruptive page-turns within the pieces, the volume brings modern performers close to the special sound of this music. Rounding off this pioneering new edition are an extensive Foreword, notes on historical performance practice, a comprehensive glossary, facsimile pages and a detailed Critical Commentary. - Pioneering edition with the first-time evaluation of an extensive body of sources - Includes Couperin’s original expression marks - Contains nine original compositions from “L’Art de toucher le clavecin”(1716–17)