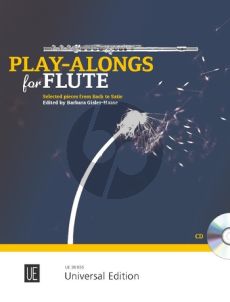 Play Alongs for Flute - selected pieces from Bach to Satie - provides the opportunity to play well-known pieces from the Baroque to the Romantic era with accompaniments on the enclosed CD, each presented as a performance to listen to followed by a version to play along to, as well as original pieces from the flautist's repertoire. There are also arrangements of famous works by Haydn, Amadeus Mozart, Schubert, Satie and many more. Live recordings of string instruments, flute piano and guitar will further encourage young musicians to play in ensembles. • 21 well-known melodies from the Baroque to the Romantic era including famous works by Haydn, Mozart, Schubert, Satie and more • Moderately difficult arrangements for flute lessons and ensemble playing at home • Live recordings on the CD (with string instruments, guitar, flute and piano) as full versions to listen to and play-along versions on the same track