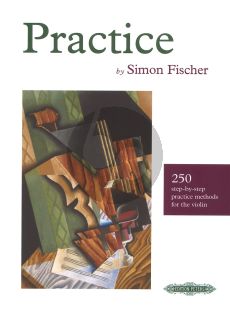 The music examples in Practice, drawn from the standard solo violin repertoire, illustrate typical musical and technical demands that arise during the normal course of playing. By learning how to practise one passage, you learn how to practise other passages of the same type. With more than 750 music examples (chosen from over 100 works) and over 100 photographs, Practice is packed with ideas and information to help you get the very most out of every minute that you practise.
Some of the practice methods are ways of solving problems.
Some are ways of finding out what the problems actually are. So often we know that something is not quite right, but we do not know why.
Some are ways of trying to cause yourself problems, so that afterwards what you actually have to do feels easier.
Some practice methods build and improve technique at the same time as making a specific passage easier to play. Then all other passages of that type take less time to learn because they feel easier to play in the first place. Practice is intended just as much for the teacher as for the player. It offers a wide range of answers to the musical and technical problems that students typically present, and adds to any teacher's 'library' of practice methods that they pass on to their students.

Simon Fischer has emerged as one of the outstanding artists and teachers of his generation. Having studied the violin with Yfrah Neaman in London and with Dorothy DeLay in New York, he has been able to unite the best elements of the Franco-Belgian, Russian and American violin traditions, and to develop them further. In great demand as a teacher, Simon Fischer is also a professor at the Guildhall School of Music and Drama, and at the Yehudi Menuhin School. At the same time, he enjoys a varied and distinguished playing career. He has given many recitals at the Wigmore Hall, the Purcell Room, and for the BBC, and has played as soloist or guest leader with many of the major symphony and chamber orchestras in the UK. His monthly Basics articles in the Strad magazine, which have run since 1991, have attracted world-wide interest and acclaim, as has his technique hook Basics, frequently referred to as the 'bible' of violin technique.