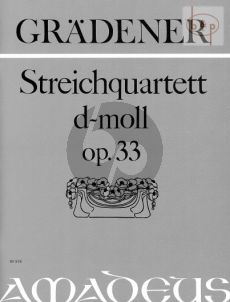 Hermann Grädener (1844-1929) was born in northern German city of Kiel. His father Karl was also a composer and teacher. In 1862, Hermann entered the Vienna Conservatory where he studied composition and violin. He worked for a number of years as a violinist in the Court Orchestra and gained a reputation as a respected composer and teacher, eventually holding a professorship at the Vienna Conservatory. He also served for a number of years as the director of the famed Vienna Singakademie. The important chamber music critic Wilhelm Altmann, writing in his Handbook for String Quartet Players described this work as follows: 'Grädener has left us two completely noteworthy string quartets. The first, Op.33, dates from 1898. The main theme of the opening Allegro con brio is full of character and well executed. The second movement, Adagio non troppo, subtitled 'To be played as a ballad' leaves a strong impression with its deep feeling and rich tonalities. A jovial Scherzo, allegro molto, follows. It has two captivating waltz-like themes. The finale, Rondo, is full of magnificent melodies and tonalities and is capped off by a long exciting coda. This is a substantial work from the late romantic era which deserves performance in the concert hall and which amateurs will also find engaging.