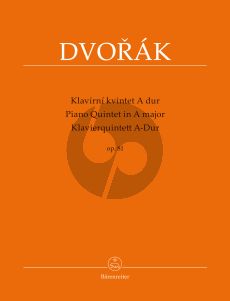 Piano Quintet in A major, Op.81, in four movements, was written in 1887 over the course of a few weeks, during a particularly fertile, inventive period. Long since one of the most performed works in the world chamber music repertoire, the piece was first presented at a popular concert of Dvorak's music in Prague's Rudolfinum in January 1888. It was published that same year by German publisher Simrock. This title is part of the first Complete Critical Edition of Works by Antonin Dvorak.