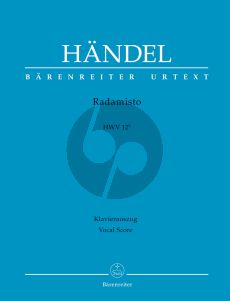 This vocal score is a supplement edition to the score of “Radamisto” (BA 4066) which is part of the “Halle Handel Edition” (Series II, Volume 9.2) edited by Terence Best. It, like the score, presents the music of the second version of the opera which was premiered on 28 December 1720 at the King's Theatre, Haymarket, London as well as the amendments made for November 1721 revival. The appendix includes the amendments for the January/February 1728 version.

The first season of the Royal Academy ended on 25 June 1720. The new vocal soloists arrived in London in September. As the first version of “Radamisto” had been a great success during the first season, Handel revised the opera for the oncoming season to accommodate it to his new more proficient cast.

The revision was extensive. It included:
1) Changes to the vocal range of Radamisto (soprano to alto for the singer Senesino), Zenobia (alto to soprano for the female singer Durastanti) and Tiridate (tenor to bass for the singer Boschi),
2) compositions of new arias and ensembles,
3) significant changes to the plot consisting of the reduction of Fraartes’ role from brother to servant Tiridates and the omission of his not so original love affair to Zenobia.

For most of Handel's operas it can be said that the first version is the best version. This is due to the fact that when a work was performed again in later seasons, Handel was often forced to make changes due to casting constraints which often affected the equilibrium and the dramatic context of the work. “Radamisto” is an exception to this rule – the December 1720 adaptation which forms the main part of this vocal score is a much more superior composition than the version performed in April of the same year.