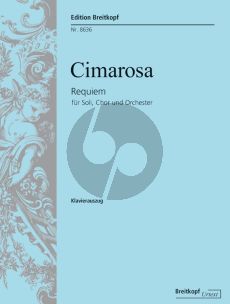 All the more amazing is the discovery of an authentic, subsequently added "Libera me" movement that is found in the main sources (autograph score, original parts), but had not been published up to now. The complete liturgical form of the Requiem requires a "Libera me" and with this new edition, Cimarosa's Requiem can now finally be performed again its entirety, more than 200 years after it was written. Reinmar Emans' new Urtext edition thus contains much more than just the previously known music text. Valuable aid was provided here by a number of contemporary copies which yielded further important details.