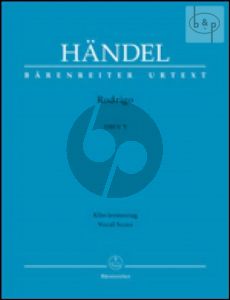 Rodrigo was premiered in autumn 1707 in Florence and is therefore one of Handel's early stage works. The composer, only 22 years old, wrote a densely-woven musical scenario for his first opera composed in Italy. It masterfully portrays the dramatic states of mind of the protagonists surrounding the Iberian tyrant Rodrigo and the plot full of deception, betrayal, adultery, war as well as the transformation wrought by Rodrigo's abdication.

The work was not, as was long thought, a commission from the Prince of Medici. Despite this, Rodrigo seems to have been so popular that Handel extended his stay in Italy and was able to compose several operas during the following period. In Rodrigo, the mastery which made Handel's succeeding opera Agrippina such a success, is already clearly evident. Agrippina consequently made HandelÆs name famous throughout Europe and soon led to his first journey to London.

The new vocal score is based on Volume II/2 of the Halle Handel Edition (BA 4083). The appendix contains the surviving variants in the versions of the first performances from Handel's lifetime.